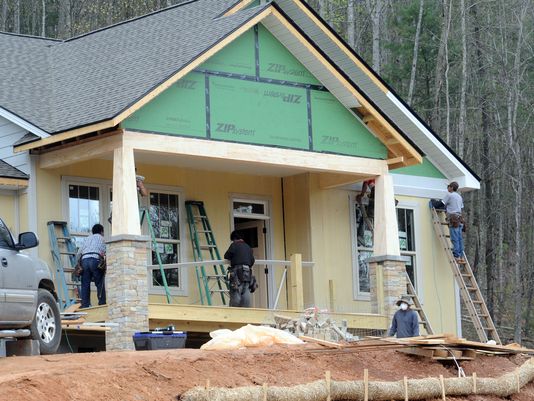 Figures for the next few months should show whether this winter's decline in home sales was a blip or a signal of a more fundamental change in the local housing market.

ASHEVILLE - No one looked forward to spring this year more than your local Realtor.

After rising for the first 11 months of 2013, sales of existing homes in Buncombe County flattened in December and were down in January and February this year when compared with the year before.

Figures for the next few months should show whether this winter's decline was a blip caused by harsh weather keeping buyers from looking for a house or whether it signals a more fundamental change in the local housing market.

The picture for the home building industry looks reasonably good, with the number of building permits issued in Buncombe County up significantly in 2013 and city and county officials reporting good activity levels so far in 2014, although figures for the entire first quarter were not available for this story.

Sales of existing homes in Buncombe County were up every year this decade after bottoming out in 2009. The total of 3,375 homes sold in 2013 in the county was 56 percent higher than in 2009, but still nearly 18 percent below the market's peak of 4,109 sales in 2006, according to the N.C. Association of Realtors.

The National Association of Realtors said last week that sales of existing homes across the United States slipped in March to their lowest level since July 2012, The Associated Press reported, as rising prices and a tight supply of available homes discouraged many would-be buyers. The 0.2 percent decline was the seventh drop in the last eight months.

National analysts have said the tough winter hurt sales during the first two months of the year, but higher interest rates and sluggish growth in wages threaten the housing recovery over the long term.

Too cold to buy?

Local experts say weather was definitely a factor in slow sales early this year in Buncombe County, but there is uncertainty about whether the slowdown will continue.

Sales in Buncombe County always fall during the winter months, but sales last winter were not as high as the winter before.

"I think it's just truly weather-related," said Terry Horner, head of Preferred Properties of Asheville. Many buyers in the Asheville are moving here from elsewhere and, "It was not a good time to travel," he said.

Figures compiled by Mike Figura, head of Mosaic Community Lifestyle Realty, show home sales rising a bit within the Asheville city limits for the first quarter but declining 11.6 percent in the rest of Buncombe County.

"In the city of Asheville, anyway, the recovery is not coming to a halt. As far as Buncombe County, the numbers do kind of imply that," he said.

The split probably reflects a renewed interest nationally in living closer to city centers, Figura said. He said it is also possible that it was more difficult for prospective buyers to get to homes for sale in rural areas this winter.

Analyst Don Davies said weather dampened sales countywide, but out-of-town buyers do not have the seemingly endless desire for a home here that they did early in the last decade.

"I'm still not seeing the second home buyers coming out here saying, 'I don't care what it costs,'" he said.

The number of homes on the market last week was down about 20 percent from where it was at the same point in 2013, Davies said. He said the current figure of about 1,800 homes for sale in Buncombe County is "definitely in the range that is comfortable for our market" but that it could contribute to a gradual increase in prices.

Building on the rise?

The number of single-family homes permitted by Buncombe County government during the first quarter was up 14.3 percent. Exact numbers for the city of Asheville were not available Friday, but city Development Services Director Shannon Tuch said the department has seen considerable permit activity and preliminary planning for new construction, although much of the interest is in commercial structures.

According to figures from The Market Edge, 2011 was the low point for home building in the county, with permits up 19.7 percent in 2012 and 23.5 percent last year.

Dale Akins, head of the research firm, based in Knoxville, Tenn., said he expects declines in first-quarter building permits in many of the Southeastern markets the company tracks because the pace of job growth has slowed. But, he said, first-quarter figures are not always good indicators of what will happen the rest of a year.

Christopher Fox, owner of Christopher Fox Builders and president of the Asheville Home Builders Association, said members have done a lot of renovations in recent years as people wanted more space but were reluctant to take the plunge of buying a new home. Now, he said, some home owners are making repairs needed to put a home on the market and are interested in buying a new home themselves.

Sales of existing homes in Buncombe County have risen every year this decade so far and were strong for most of 2013. Below are the number of homes sold by month and the percentage change over the same month vs. the year before. 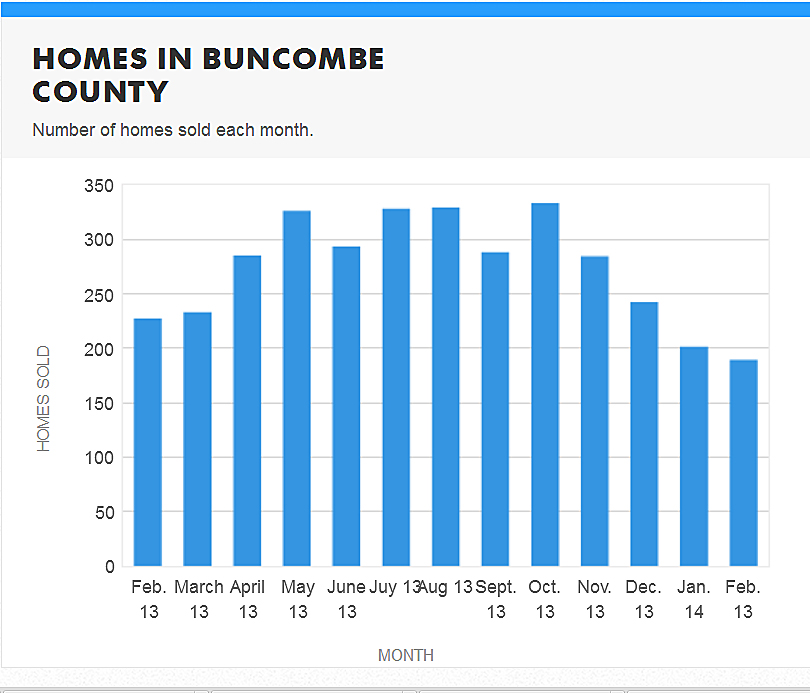 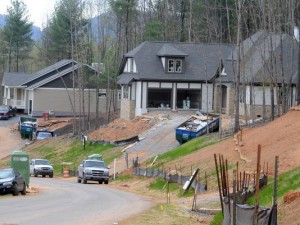 From 2003-2009, the median sale price for a home outside Asheville but still in Buncombe County was higher than it was inside the city. But the city and the county figures flip-flopped in 2010.

ASHEVILLE - The number of home buyers looking to live in neighborhoods within a reasonable bicycle ride of downtown Asheville reflects more than a desire to be close to a favorite brewpub, says local Realtor Mike Figura.  Demographers and real estate analysts nationwide say there is an increase in interest in urban living in many parts of the country, although there is disagreement about how strong it is and what it means for home sales in suburban and rural areas.

Statistics complied by Figura, head of Mosaic Community Lifestyle Realty, suggest there has been a shift of some kind in the positions of the housing markets inside Asheville and outside city limits...more 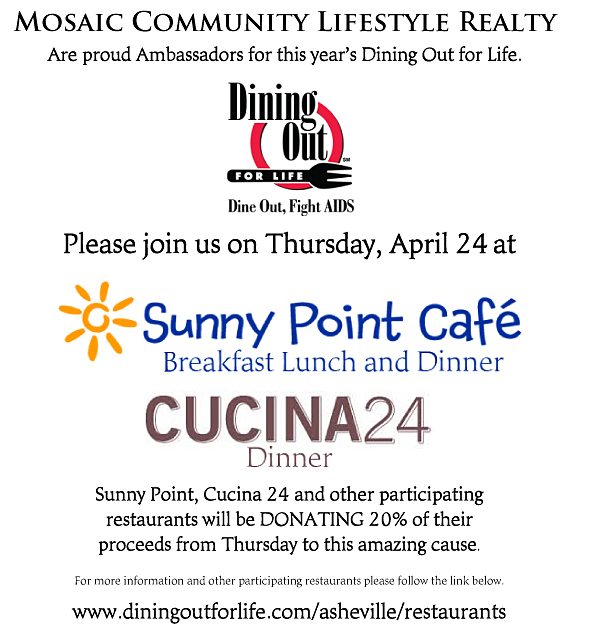 You are cordially invited to join your friends, clients, family and co-workers on Thursday, April 24, 2014, for the 12th annual Dining Out For Life® benefit to support the mission of the Western North Carolina AIDS Project (WNCAP). Over 100 of the finest restaurants in WNC have generously agreed to donate 20% of their gross sales on April 24th to help ... needs are greater than ever this year with a reduction in federal funding, and an increasing number of clients who need help. You can do your part by simply dining out for breakfast, lunch or dinner or all three.

We at Mosaic are proud to be ambassadors this year, come see us at Sunny Point in West Asheville, and at Cucina 24 downtown.

Through the efforts of so many giving individuals and businesses, much needed AIDS awareness and education has been provided throughout WNC, while providing case-managed care to those whose lives have already been affected by HIV/AIDS. 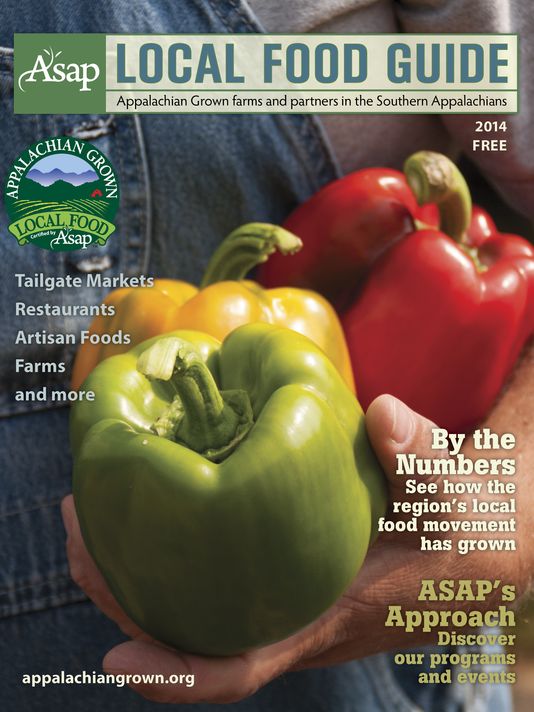 More than one million copies of the Local Food Guide, part of the nonprofit's Local Food campaign, have been distributed since 2002.

The 2014 Local Food Guide can be picked up at ASAP's booth at the Mother Earth News Fair, Saturday and Sunday at the WNC Ag Center.

The latest guide listings can also be found online at appalachiangrown.org. Print copies will be distributed after the fair to more than 400 locations, the locations of which can be found on the guide page of asapconnections.org. 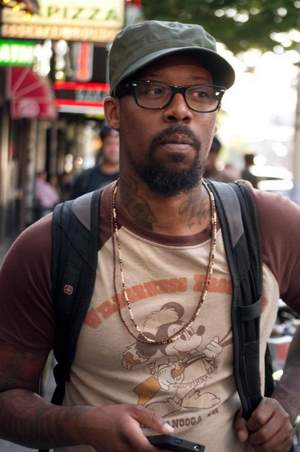