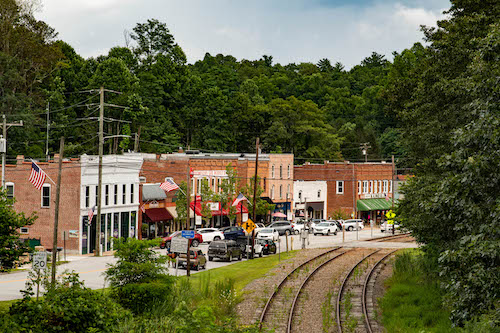 Saluda, N.C., has been drawing visitors to its picturesque Main Street and accessible forests since the late 1800s. With established restaurants as well as shops and galleries set against a stunning backdrop, this tiny town – 35 miles southeast of Asheville – offers lots of picturesque quaintness coupled with exhilarating outdoor adventure.

Straddling Polk and Henderson counties, Saluda sits atop the Norfolk Southern Railway’s Saluda Grade, which was the steepest railroad grade in the country during its use. The city has a population just over 700, with Polk County Schools, as well as a handful of private and parochial educational institutions, serving the residents. Homes in Saluda encompass everything from snug log cabins to rustic ranches to sprawling mountainside estates.

Eclectic eateries and shops of Saluda

Saluda’s Main Street features an eclectic selection of established restaurants, shops and galleries. Most of the buildings that line downtown are part of the National Register of Historic Places. Among the popular spots to stop in are M.A. Pace General Store (founded in 1899), as well as restaurants such as The Purple Onion (famed for Mediterranean fare and live music), Azalea Bistro (featuring a French lowcountry menu), and Green River BBQ. 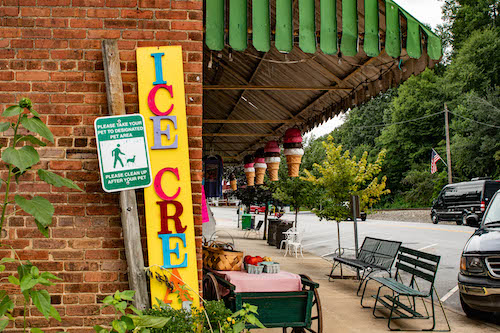 Sandwiched between 18,000 acres of the Green River Game Lands and the Greenville Watershed, Saluda offers a variety of outdoor adventures, including whitewater kayaking, stand-up paddle-boarding, tubing, fishing, seasonal hunting, camping and waterfall rappelling. Saluda is also a premier destination for road biking. A quick drive from Saluda is the world-famous Tryon International Equestrian Center, as well as the Tryon Foothills Wine Country.

Several festive events add excitement to the area every year. The Tryon Block House Steeplechase, held every April, captures the thrill of horse racing, with the longest running steeplechase in North Carolina. The Saluda Arts Festival, held in May along Main Street, features hand-picked regional artists from a range of backgrounds, as well as Americana, blues and folk musicians. The Coon Dog Day Festival, held in July, is a street fair for pups and their fans, featuring live entertainment, food, street dancing, dog competitions, a parade and more.

For more information about real estate in Saluda, or anywhere in Western N.C., contact us at Info@MyMosaicRealty.com, or call us anytime at 828-707-9556.